Uit het persbericht van de WMO
‘(…) The global average surface temperature in 2015 is likely to be the warmest on record and to reach the symbolic and significant milestone of 1° Celsius above the pre-industrial era. This is due to a combination of a strong El Niño and human-induced global warming, according to the World Meteorological Organization (WMO).
The years 2011-2015 have been the warmest five-year period on record, with many extreme weather events – especially heatwaves – influenced by climate change, according to a WMO five-year analysis.
“The state of the global climate in 2015 will make history as for a number of reasons,” said WMO Secretary-General Michel Jarraud. “Levels of greenhouse gases in the atmosphere reached new highs and in the Northern hemisphere spring 2015 the three-month global average concentration of CO2 crossed the 400 parts per million barrier for the first time. 2015 is likely to be the hottest year on record, with ocean surface temperatures at the highest level since measurements began.  It is probable that the 1°C Celsius threshold will be crossed,” said Mr Jarraud. “This is all bad news for the planet.”
Greenhouse gas emissions, which are causing climate change, can be controlled. We have the knowledge and the tools to act. We have a choice. Future generations will not.” 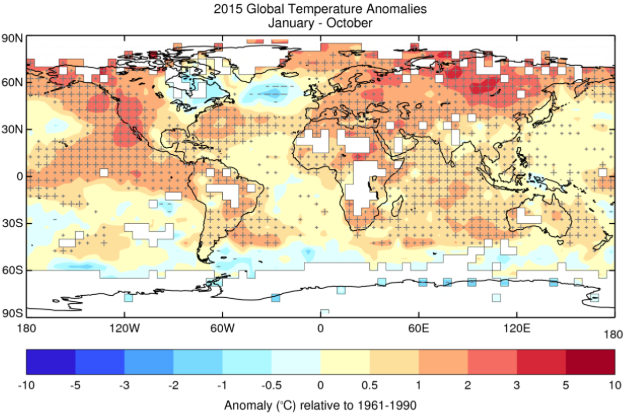 “Added to that, we are witnessing a powerful El Niño event, which is still gaining in strength. This is influencing weather patterns in many parts of the world and fuelled an exceptionally warm October. The overall warming impact of this El Niño is expected to continue into 2016,” said Mr Jarraud.
WMO issued its provisional statement on the status of the climate in 2015, and an additional five-year analysis for 2011-2015, to inform negotiations at the U.N. Climate Change Conference in Paris.
A preliminary estimate based on data from January to October shows that the global average surface temperature for 2015 so far was around 0.73 °C above the 1961-1990 average of 14.0°C and approximately 1°C above the pre-industrial 1880-1899 period.
This temperature tendency indicates that 2015 will very likely be the warmest year on record. The global average sea-surface temperature, which set a record last year, is likely to equal or surpass that record in 2015. The global average temperatures over land areas only from January to October suggest that 2015 is also set to be one of the warmest years on record over land. South America is having its hottest year on record, as is Asia (similar to 2007), and Africa and Europe their second hottest. (…)

Climate Change Attribution
Scientific assessments have found that many extreme events in the 2011-15 period, especially those relating to extreme high temperatures, have had their probabilities over a particular time period substantially increased as a result of human-induced climate change – by a factor of 10 or more in some cases.
Of 79 studies published by Bulletin of the American Meteorological Society between 2011 and 2014, more than half found that anthropogenic climate change contributed to extreme events. The most consistent influence has been on extreme heat, with some studies finding that the probability of the observed event has increased by 10 times or more.
Examples include the record high seasonal and annual temperatures in the United States in 2012 and in Australia in 2013, hot summers in eastern Asia and western Europe in 2013, heatwaves in spring and autumn 2014 in Australia, record annual warmth in Europe in 2014, and the Argentine heatwave of December 2013. (…)