‘(…) Scientists say that to avoid [the] dramatic long-term changes to the climate, the world must cut greenhouse gas emissions by up to 80 percent by 2050, and eliminate them entirely by the end of the century. When I first heard this I was surprised. Can’t we just aim to cut carbon emissions in half? I asked many scientists. But they all agreed that wouldn’t be enough. The problem is that CO2 lingers in the atmosphere for decades. Even if we halted carbon emissions tomorrow, the temperature would still rise because of the carbon that’s already been released. No, we need to get all the way down to zero.

That’s a huge challenge. In 2015, the world emitted 36 billion tons of carbon dioxide to produce energy. This is a mind-boggling number. (It’s worth remembering, because it will come in handy. For example, someone may tell you they know how to remove 100 million tons of carbon per year. That sounds like a lot, but if you do the math—100 million divided by 36 billion—you’ll see that they’re talking about 0.3 percent of the problem. Every reduction in emissions helps, but we still have to work on the other 99.7 percent.) 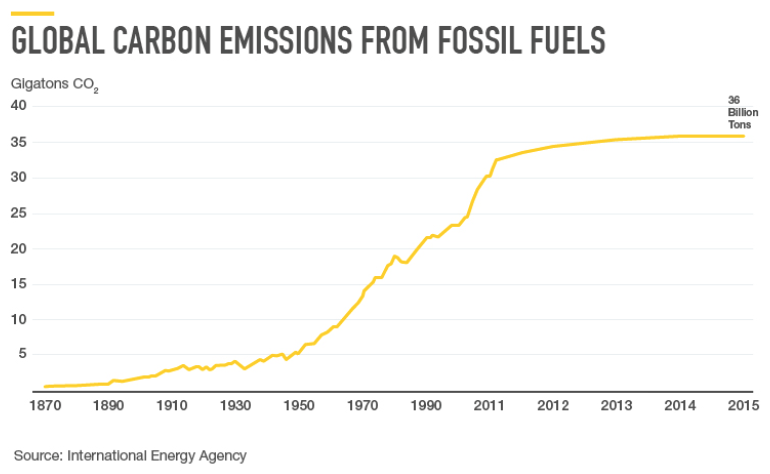 How can we ever reduce a number like 36 billion tons to zero? Whenever I’m confronted with a big problem I turn to my favorite subject: math. It’s one subject that always came naturally to me, even in middle school when my grades weren’t that great. Math cuts out the noise and helps me distill a problem down to its basic elements. Climate change is an issue that has plenty of noise surrounding it. There are those who deny it is a problem at all. Others exaggerate the immediate risks. What I needed was an equation that would help me understand how we might get our CO2 down to zero. Here’s what I came up with:

That might look complicated. It’s not.
On the right side you have the total amount of carbon dioxide (CO2) we put in the atmosphere. This is what we need to get to zero. It’s based on the four factors on the left side of the equation: the world’s population (P) multiplied by the services (S) used by each person; the energy (E) needed to provide each of those services; and finally, the carbon dioxide (C) produced by that energy. As you learned in math class, any number multiplied by zero will equal zero. So if we want to get to zero CO2, then we need to get at least one of the four factors on the left to zero. Let’s go through them, one by one, and see what we get.
The world’s population (P) is currently 7 billion and expected to increase to 9 billion by 2050. No chance it’ll be zero.
Next, services. This is everything: food, clothing, heat, houses, cars, TV, toothbrushes, Elmo dolls, Taylor Swift albums, etc. This is the number that I was saying earlier needs to go up in poor countries, so people can have lights, refrigerators, and so on. So (S) can’t be zero, either.
Let’s take a look at (E). That’s the energy needed per service. There’s some good news here. Fuel-efficient cars, LED light bulbs, and other inventions are making it possible to use energy more efficiently.
Many people, and you may be one of them, are also changing their lifestyles to conserve energy. They’re biking and carpooling to save gas, turning down the heat a couple degrees, adding insulation to their homes. All of these efforts help cut down on energy use.
Unfortunately, they don’t get us to zero. In fact, most scientists agree that by 2050 we’ll be using 50 percent more energy than we do today.
So none of the first three—population, services, and energy—are getting close to zero. That leaves the final factor (C), the amount of carbon emitted per each unit of energy.

The majority of the world’s energy, other than hydro and nuclear, is produced by fossil fuels like coal that emit an overwhelming amount of CO2. But there’s some good news here, too. New green technologies are allowing the world to produce more carbon-free energy from solar and wind power. Maybe you live near a wind farm or have seen solar panels near your school.
It’s great that these are getting cheaper and more people are using them. We should use more of them where it makes sense, like in places where it’s especially sunny or windy. And by installing special new power lines we could make even more use of solar and wind power.
But to stop climate change and make energy affordable for everyone, we’re also going to need some new inventions.
Why? Solar and wind power are reliable energy sources so long as the sun is shining and the wind is blowing. But people still need dependable energy on cloudy days, at nighttime, and when the air is still. That means power companies often back up these renewable sources with fossil fuels like coal or natural gas, which emit greenhouse gases.
It would help, of course, if we had a great system for storing solar and wind power. But right now, the best storage option is rechargeable batteries, and they are expensive. Lithium-ion batteries like the one inside your laptop are still the gold standard. If you wanted to use one to store enough electricity to run everything in your house for a week, you would need a huge battery—and it would triple your electric bill.
So we need more powerful, more economical solutions.
In short, we need an energy miracle.

When I say “miracle,” I don’t mean something that’s impossible. I’ve seen miracles happen before. The personal computer. The Internet. The polio vaccine. None of them happened by chance. They are the result of research and development and the human capacity to innovate.
In this case, however, time is not on our side. Every day we are releasing more and more CO2 into our atmosphere and making our climate change problem even worse. We need a massive amount of research into thousands of new ideas—even ones that might sound a little crazy—if we want to get to zero emissions by the end of this century.

New ways to make solar and wind power available to everyone around the clock could be one solution. Some of the crazier inventions I’m excited about are a possible way to use solar energy to produce fuel, much like plants use sunlight to make food for themselves, and batteries the size of swimming pools with huge storage capacity.
Many of these ideas won’t work, but that’s okay. Each dead end will teach us something useful and keep us moving forward. As Thomas Edison famously said, “I have not failed 10,000 times. I’ve successfully found 10,000 ways that will not work.”
But to find thousands of ways that won’t work, you first need to try thousands of different ideas. That’s not happening nearly enough.
Governments have a big role to play in sparking new advances, as they have for other scientific research. U.S. government funding was behind breakthrough cancer treatments and the moon landing. If you’re reading this online, you have the government to thank for that too. Research paid for by the U.S. government helped create the Internet.

So we need to get started now. I recently helped launch an effort by more than two dozen private citizens that will complement government research being done by several countries. It’s all aimed at delivering energy miracles.
You may be wondering what you can do to help.
First, it’s important for everyone to get educated about this energy challenge. Many young people are already actively involved in climate and energy issues and I’m sure they could use more help. Your generation is one of the most globally minded in history, adept at looking at our world’s problems beyond national borders. This will be a valuable asset as we work on global solutions in the decades ahead.
Second, if you’re someone with some crazy-sounding ideas to solve our energy challenge, the world needs you. Study extra hard in your math and sciences. You might just have the answer.

The challenge we face is big, perhaps bigger than many people imagine. But so is the opportunity. If the world can find a source of cheap, clean energy, it will do more than halt climate change. It will transform the lives of millions of the poorest families.

I’m so optimistic about the world’s ability to make a miracle happen that I’m willing to make a prediction. Within the next 15 years—and especially if young people get involved—I expect the world will discover a clean energy breakthrough that will save our planet and power our world.

I like to think about what an energy miracle like that would mean in a slum I once visited in Nigeria. It was home to tens of thousands of people but there was no electricity. As night fell, no lights flickered on. The only glow came from open fires lit in metal barrels, where people gathered for the evening. There was no other light for kids to study by, no easy way to run a business or power local clinics and hospitals. It was sad to think about all of the potential in this community that was going untapped.

A cheap, clean source of energy would change everything.