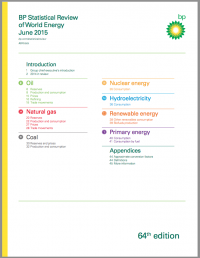 Summary
Consumption increased for all fuels, reaching record levels for every fuel type except nuclear power; production increased for all fuels except coal. For oil and natural gas, global consumption growth was weaker than production. The data suggest that global CO2 emissions from energy grew at their slowest rate since 1998, other than in the immediate aftermath of the financial crisis.
Emerging economies accounted for all of the net growth in energy consumption, as they have on average over the past decade, although growth in these countries was well below its 10-year average. Chinese consumption growth was the slowest since 1998, yet China still recorded the world’s largest increment in primary energy consumption for the fourteenth consecutive year. OECD consumption experienced a larger than average decline, with weakness in the EU and Japan offsetting above average growth in the US. Energy consumption in the EU fell to its lowest level since 1985.
Energy price developments in 2014 were generally weak, with oil and coal prices falling globally. Gas prices fell in Europe, were relatively flat in Asia, and rose in North America. The annual average price for Brent, the international crude oil benchmark, declined reflecting a sharp fall in prices in the second half of the year. The differential between Brent and the US benchmark West Texas Intermediate (WTI) narrowed but remained elevated relative to past levels. As with crude oil prices, differentials between North American and international gas prices generally narrowed but remained wider than historical levels.