19 november 2015 – ‘We hope that this publication will spur the international campaign to phase out the use of coal.’ Met deze woorden presenteerde de Heinrich Böll Stiftung gisteren haar mondiale ‘Coal Atlas’.

Uit een bericht van de Heinrich Böll Stiftung
‘(…) Our Coal Atlas contains the latest facts and figures on the use of coal and its environmental and social consequences. With more than 60 detailed graphics, the atlas illustrates the coal industry’s impact on nature, health, labour, human rights and politics. (…)’

Uit een ander bericht bij de atlas (over steenkool  en CO2-reductie)
‘(…) “We have borrowed the Earth from our children.” This early environ-mental movement slogan uses simple words to express a central tenet of responsible, forward-looking policies: we must preserve the basis for the livelihood of future generations. We must leave a better world to our children than the one that we inherited.
Today, this principle compels us to do everything in our power to stop climate change and the damage it is causing. This means that by the middle of the century, we will have to decarbonize our economy and society. A milestone on this road is the phasing out of coal-burning. That is a huge challenge: coal was, and still is, the fuel of industrialization and global economic growth. Switching to renewable energy and a more efficient economy requires nothing less than a worldwide energy revolution. 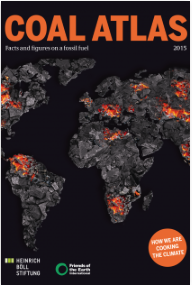 A look at the statistics shows that global demand for coal is still rising. Growth will average a rate of 2.1 percent annually through 2019. Just over half the world’s usage takes place in China, which is by far the biggest consumer and importer. King Coal also generates 43 percent of Germany’s total energy. Even so, renewables have overtaken lignite, an especially climate-damaging type of coal, as a power source in Germany in 2014. The International Energy Agencypredicts that the use of coal to produce energy will decline in the medium term. Even in China, there are signs that consumption has peaked.

The coal boom has negative consequences for humans and nature that outweigh its economic benefits. Coal does not just kill the climate. In coal mines, terrible working conditions are rife. Accidents are commonplace. The environmental and health costs linked to the use of coal to generate electricity are enormous. Turning away from fossil (and nuclear) fuels towards renewable energy can offer huge economic and social opportunities. It would create jobs and cut costs. A shortage of power can best be overcome by the decentralized generation of energy from renewable sources.

A multilateral, binding climate agreement must give a clear signal to phase out fossil fuels. Companies that have made huge profits from fossil fuels should be made legally and financially responsible for the damage they have caused, and continue to cause. To speed the transition, a reasonable price must be set for CO2 emissions.

We hope that this publication will spur the international campaign to phase out the use of coal. We are particularly pleased with the efforts of many of our offices abroad to produce editions of this atlas in local languages. We hope you will find this stimulating reading. (…)’