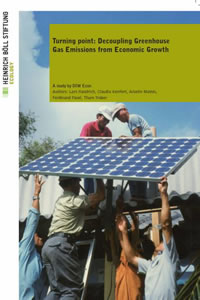 Samenvatting
The transformation of economic growth towards a lower dependency on fossil fuels and related greenhouse gas (GHG) emissions is essential for the feasibility of a successful global climate strategy. The year 2014 was the first in decades that saw worldwide economic growth and a reduction of energy-related GHG emissions. This study attempts to explore these developments and illuminate the drivers through descriptive data analysis, a review of empirical research and a regression analysis. The assessment covers data for the period 1990 to 2014 and includes economic growth, energy-related GHG emissions, energy consumption and energy carriers for 34 countries. Particular emphasis is put on the often-cited examples of China, the US and Germany, which are then compared with the OECD aggregate, India and the worldwide picture.

Regarding the past decade, it turns out that global growth went along with an increase of energy use, and that despite a steady decrease of conventional energy intensity. This weak decoupling process was facilitated by greater energy efficiency and the roll-out of renewables. Since 2004, solar and wind have been the fastest growing energy sources worldwide, and they saw substantially accelerated growth over the last four years. This is true for China, India and the OECD group of countries. Moreover, our empirical assessment of the causal relationships suggests that renewables may even promote economic growth. For climate policy this presents an optimistic perspective.

In particular, the OECD countries show a strong decoupling of conventional energy and of emissions over the last decade. As exemplified by Germany, a successful renewable energy strategy combined with substantial energy savings will result in substantial emissions reductions – and that despite the phasing out of nuclear energy. China and India are of particular importance for global trends due to their high growth rates. However, their growth follows diverging patterns. While on a continued economic growth path, China succeeded in a weak decoupling from conventional energy requirements and emissions.

Moreover, strong decoupling seems possible in the near future. In 2014, China stopped the expansion of coal use and met the modest 3% growth in energy consumption mainly with less emission intensive energy sources such as natural gas, wind and solar power. By contrast, India’s renewable energy expansion is more than canceled out by investment in emission-intensive power sources, mainly coal-fired power plants.

For the US, the second largest GHG emitter, the outlook is unclear. Although the US has successfully combined substantial economic growth with a reduction in total emissions, strong decoupling has not continued since 2012. If China succeeds to further reduce its emissions, this will send strong signals towards a global low-carbon transition.