Uit een persbericht van het European Environment Agency
Wind, solar and other renewable energy sources are steadily increasing their share in energy consumption across the European Union, further reducing the need for CO2-emitting fossil fuel energy, according to a report published by the European Environment Agency (EEA) today. This trend is driving down greenhouse gas emissions from electricity generation, buildings’ heating and cooling, and transport. 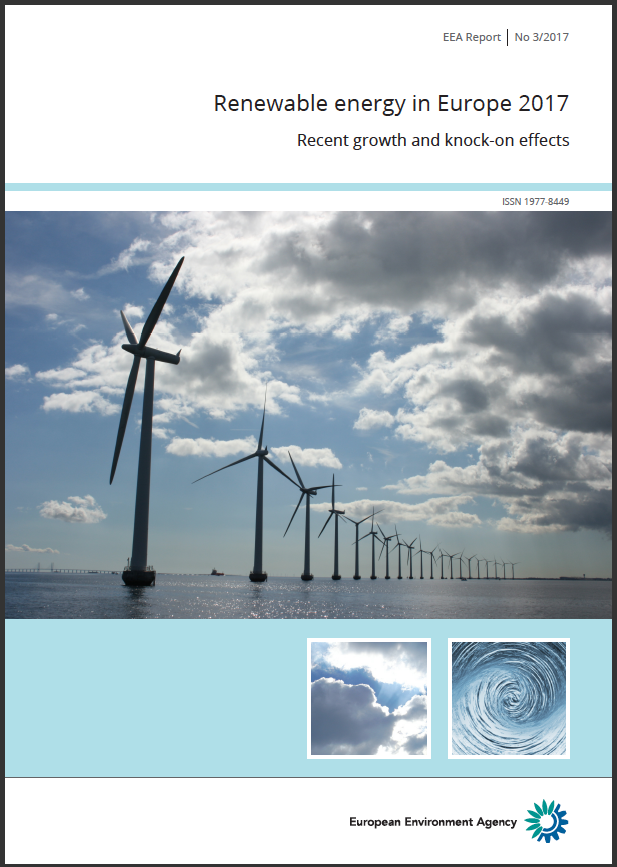 The EEA report ‘Renewable energy in Europe 2017: recent growth and knock-on effects,’ shows that renewables have become a major contributor to the energy transition occurring in many parts of Europe. Growth in renewables continues to bolster climate change mitigation in the EU. The EU-wide share of renewable energy use increased from 15% in 2013 to 16% in 2014. This upward trend continued also in 2015, as renewable energy accounted for the majority (77%) of new electricity-generating capacity for the eighth year in a row. Recent data from Eurostat showed that the EU-wide renewable energy use finally reached 16.7% in 2015 – which is close to the EEA’s 16.4% preliminary estimate published in December 2016. This steady EU-wide progress in renewables since 2005 enables the EU to stay well on course to reach its target of 20 % by 2020.
At Member State level, the shares of renewable energy use continues to vary widely, ranging from over 30% in Finland, Latvia and Sweden, to 5% or less in Luxembourg and Malta.

Renewables catching on worldwide
Global investments in renewables continued to show steady growth over the past decade. This has led to a doubling of global renewable electricity capacity between 2005 and 2015. The EU plays a leading role in developing clean energy technology and is ranked second after China in installed and grid-connected domestic renewable electricity capacity. Still, some non-EU countries are seeing faster progress, something observed also in terms of the share of renewable-energy related jobs in the labour force where in 2015 the EU was overtaken by other countries, such as Japan and China.

The EU and its Member States will need to step-up their climate and energy efforts if they want to meet EU ambitions to become a sustainable, low-carbon economy by 2050, the report says. Key challenges remain, including the formulation of adequate policies that deliver targets, agreeing on an EU monitoring system and improving innovation capabilities to reap the full benefits of the energy transition in Europe. (…)’

Onshore wind
In 2015, the normalised onshore wind production of electricity was estimated to be 20.8 Mtoe. The greatest increase in normalised onshore wind production at the Member State level was in Germany, which corresponds to an additional installed onshore capacity of 3.5 GW. Other Member States with large absolute additions to capacity were Poland (+ 1.3 GW), France (+ 1.0 GW) and Sweden (+ 0.6 GW). Furthermore, the Netherlands, Finland and Austria added more than 0.3 GW in 2015. (…)

Solar PV
The greatest increase in solar PV electricity production at the Member State level was in the United Kingdom, which corresponded to an additional installed capacity of 3.5 GW (10). Other Member States with substantial absolute capacity additions were Germany (1.4 GW) and France (0.9 GW). A further four Member States (Austria, Denmark, Italy, Netherlands) added more than 0.1 GW in 2015. (…) 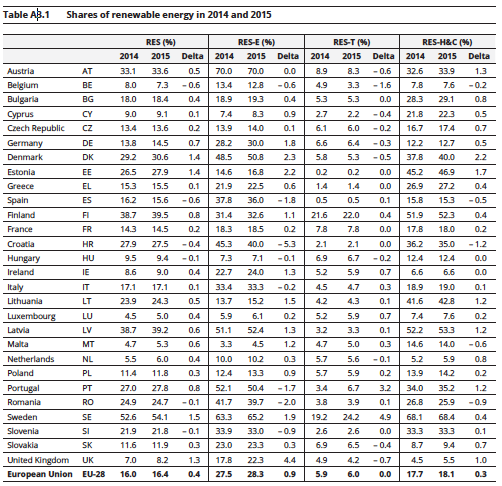 Uit een bericht van The Guardian
‘(…) A surge in the use of wind and solar energy helped Europe to cut its fossil fuel consumption and greenhouse gas emissions by about 10% in 2015, (…) but the clean energy burst is still not moving fast enough to prevent a “lock-in” of already-commissioned fossil fuel capacity, which will otherwise transform into stranded assets.
It was also unevenly spread across Europe, with renewables expanding to take up 30% of the power load in many Scandinavian countries, but only 5% in Malta. (…)
Mihai Tomescu, who authored the EEA study, said Europe’s renewable roll-out was accelerating, but not fast enough to halt global warming at 2C. (…)’