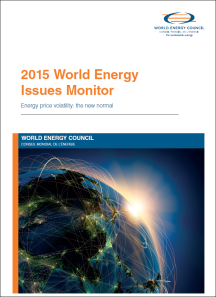 ‘Energy leaders see energy price volatility and the future of a climate framework as their top critical uncertainties (…)
The uncertain impact of volatile energy and commodity prices, first highlighted in last year’s report as an emerging priority, has now established itself as the number-one issue for energy leaders worldwide. Energy leaders are worried about the recent sharp plunge in the oil price to its five-year low. They are kept busy by the continual reduction in the cost of renewable energy technologies, which have increased their share in the energy mix, but have also put strains on the energy system. In some parts of the world that do not have viable energy storage solutions, the grid is not yet able to cope with large shares of intermittent forms of energy and lacks effective market signals to deliver back-up capacity or storage.

Climate framework is perceived as the next most critical uncertainty ahead of a global climate agreement being reached at the Conference of the Parties meeting (COP-21) in Paris at the end of this year. This issue – which could spell the presence or absence of a meaningful carbon price – has been a top critical uncertainty since the first World Energy Issues Monitor in 2009.

Energy leaders believe that the emissions agreement between China and the US, announced in November 2014, has increased the pressure on other large emitters whose stance and approach to cutting emissions still pose a large question mark for investors. Leaders from North America and other OECD countries believe that a climate framework will strongly impact on their energy sector, and this reflects these countries’ historic and expected commitment to legally binding climate targets. By contrast, while African leaders see climate change as a top concern, they are more worried about the physical impacts of climate change such as extreme weather events, rather than about the uncertain outcomes of negotiations on a climate framework.

Christoph Frei, Secretary General of the World Energy Council, comments at the launch of the report at the Handelsblatt Annual Conference “Energy Industry” in Germany:

“High price volatility has become the new normal facing energy leaders. This is the context in which we expect them to take investment decisions at an unprecedented scale. The unprecedented uncertainty, the need to redefine infrastructure resilience in response to emerging risks, the expectation of changing market designs and evolving business models, as well as the changing geopolitical balance have all placed energy among the top strategic issues globally for at least the next decade. The importance of choosing smart policy options and innovation strategies has become greater than ever, and balancing the energy trilemma must be at the very centre of efforts of energy leaders.”

The report also finds that developing electric storage and the quest for energy finance continue to keep energy leaders busy. These issues will be influenced by the future of energy subsidies, a key ‘need for action’ area in the 2015 survey, with the design of market mechanisms playing an important role. Capital markets ranked among the top critical uncertainties in the 2014 survey

but in 2015 this issue is considered as an urgent action item. In particular, the increasing shares of intermittent renewable energy sources, which are expected to quadruple by 2035, will further drive the need for storage facilities to stabilise the supply. The storage issue has increased in perceived impact and uncertainty compared to 2014 and has risen globally in importance.

Christoph Frei adds: “We are seeing more emphasis on the need for new electricity market design, which has been in response to the greater unpredictability of supply as a result of the increasing adoption of solar and wind in the electricity mix. Along with the emerging need to better manage data and a greater risk exposure to cyber attacks, these developments have paved the way for new business models. This trend is already shown by utilities such as E.On where fundamental shifts around the role of technology and the ‘prosumer’ have led to the restructuring of business units.”

The 2015 survey underlines the way that geopolitical issues have gained importance for energy security, especially with the Russia–Ukraine conflict. However, as concerns about the effects of the global recession have alleviated since last year’s survey, energy leaders go into 2015 feeling more optimistic. (…)’