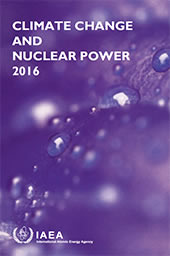 ‘(…) ‘Climate Change and Nuclear Power 2016’, an IAEA report that is updated annually, provides a comprehensive review of nuclear power’s potential to reduce the greenhouse gas emissions that contribute to global warming. The latest edition of the report comes six weeks ahead of the next United Nations climate conference, aimed at building on the landmark Paris Agreement on climate change reached last December. (…)
In Paris, 195 countries adopted the first universal, legally binding global climate accord. It established a plan of action to keep global temperature increases below 2 degrees Celsius versus pre-industrial levels, the threshold at which scientists believe there’s an even chance of averting the worst effects of climate change. In November, diplomats will gather in Marrakech, Morocco, to chart the path for implementing the agreement.

“To meet the goal of the Paris Agreement (…) all-low carbon sources of energy are needed, including nuclear power, in a combined strategy with renewable energy, energy storage and energy efficiency,” David Shropshire, Head of the IAEA’s Planning and Economic Studies Section, which produced both studies.

Among the new additions to this year’s edition of Climate Change and Nuclear Power 2016, the potential impact of the Paris Agreement on nuclear power is discussed, as is the importance of innovation, investment and research for advancing nuclear energy technology as a viable choice for countries to address climate change. The need for reliable and predictable low-carbon technologies such as nuclear power, along with accelerated deployment of renewable sources, is also addressed. (…)’

Uit het IAEA-rapport
‘(…) The diversity of the scenarios in the energy system projections suggest a broad consensus on the increasing role of nuclear power in development pathways compatible with the 2°C target in the short to medium term.
Both the latest fifth assessment report (2014) and the earlier fourth assessment report (2007) of the IPCC Working Group III highlight the potentially important contributions of nuclear power to the mitigation of GHG emissions. (…) For example, across a large number of stringent mitigation scenarios (consistent with the 2°C target) nuclear power expands from nearly 5000 TW∙h in the lower range (25th percentile) to around 13 000 TW∙h in the higher range (75th percentile) in 2050 (from 2410 TW∙h in 2014). (…)
How much of the mitigating potential of nuclear energy will be realized depends strongly on domestic policy decisions in the near future and in the following decades. These short and medium term opportunities for action in the energy sector are explored in the scenario analysis up to 2040 presented by the IEA in its World Energy Outlook 2015: the central IEA scenario, known as the New Policies Scenario, and the alternative scenario, known as the 450 Scenario7. (…)
The scenario analysis indicates that nuclear power has an important role in decarbonizing the power sector and progressing towards a 2°C target. With adequate support and effective carbon pricing, there is room for faster deployment of nuclear power, particularly in countries without nuclear power. Middle term and further expansion of nuclear power beyond 2040 is needed to achieve full decarbonization of the power sector, while meeting ever rising electricity needs. (…)’ 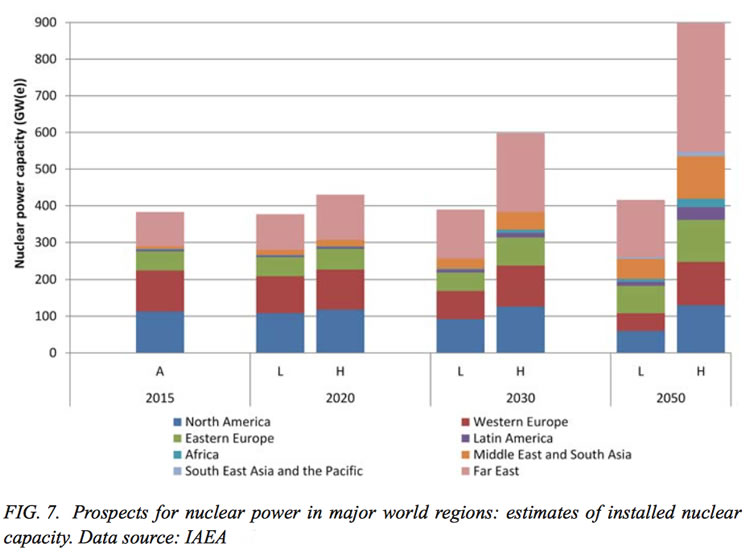