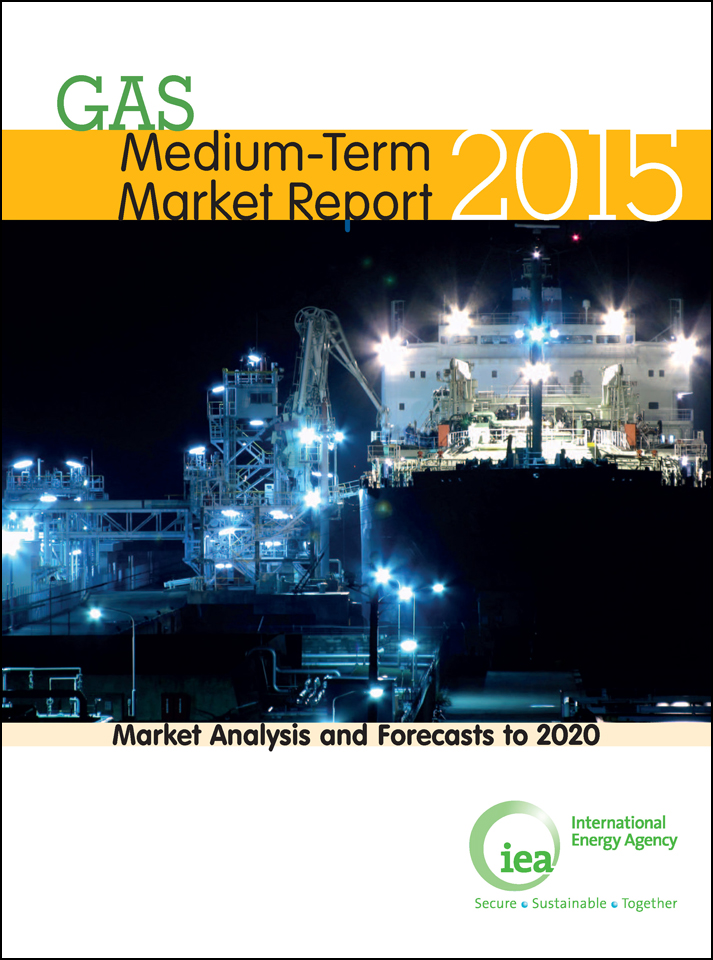 Persbericht IEA
Lower prices will feed a pick-up in global natural gas demand over the next five years following a marked slowdown in 2013 and 2014, the International Energy Agency (IEA) said Thursday in its 2015 Medium-Term Gas Market Report. Nevertheless, the growth in demand will fall short of previous forecasts.

The annual report, which gives a detailed analysis and five-year projections of natural gas demand, supply and trade developments, sees global demand rising by 2% per year by the end of the forecast period, compared with 2.3% projected in last years outlook. A significant reason for the downward revision is weaker gas demand in Asia, where persistently high gas prices until very recently caused consumers to switch to other options.

“One of the key – and largely unexpected – developments of 2014 was weak Asian demand,” said IEA Executive Director Maria van der Hoeven. “Indeed, the belief that Asia will take whatever quantity of gas at whatever price is no longer a given. The experience of the past two years has opened the gas industry’s eyes to a harsh reality: in a world of very cheap coal and falling costs for renewables, it was difficult for gas to compete.”

Asian gas prices are indexed, or linked, to those for oil. For several years, as oil prices hovered over USD 100/barrel, that meant Asian consumers were paying a hefty premium for their gas compared with buyers in other parts of the world. The rout in oil prices that began in mid-2014 has spilled over to natural gas markets in Asia and allowed the Asian premium to narrow substantially. But demand for gas in Asia may not recover as quickly as the drop in prices.

In the short term, gas demand will benefit from plunging prices, but the report adds that the long-term outlook for gas has become more uncertain – especially in Asia. A few Asian countries have decided to move ahead with plans to expand coal-fired power generation instead of gas-fired generation. “For the fuel to make sustained inroads in the energy mix, confidence in its long-term competitiveness must increase,” the report says.

On the supply side, the report notes that lower oil prices will have a major impact on gas upstream and infrastructure investment. Companies are cutting capital expenditures and refocusing on core assets with fast returns, which will unavoidably lead to slower production growth over the medium term. Due to their capital-intensive nature and long lead times, liquefied natural gas (LNG) projects are soft targets for investment reductions and several of them are likely to be delayed or even cancelled. If current low prices persist, LNG markets could start tightening substantially by 2020, with demand gradually absorbing the large supply upswing expected over the next three years.

In the short term, gas markets will need to cope with a flood of new LNG supplies. The report projects global LNG export capacity to increase by more than 40% by 2020, with 90% of the additions coming from Australia and the United States. Lower oil prices pose little risk to the timing of projects already under construction. The Australian projects are at an advanced stage of development, while project’s operators in the United States have limited price exposure once deals have been signed. New projects, however, will struggle to get off the ground at current prices.

As LNG supplies surge over the next five years, Europe is set to offer an important outlet. The report projects that the region’s LNG imports will roughly double between 2014 and 2020. Despite the foreseen increase in LNG intakes, the report does not anticipate a meaningful reduction in European imports from Russia, which will remain locked in a 150-160 bcm range. In OECD-Europe, domestic gas production is projected to continue to fall and to stand 25% below its 2010 level by 2020. Compounding the declining trend in production is a moderate recovery in demand. As a result, European gas import requirements are set to increase by almost one-third between 2014 and 2020.