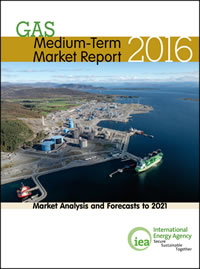 Global demand rising by 1.5% per year
The annual IEA report, which gives a detailed analysis and five-year projections of natural gas demand, supply and trade developments, sees global demand rising by 1.5% per year by the end of the forecast period, compared with 2% projected in last year’s outlook. Slower primary energy demand growth and the decline in the energy intensity of the world economy are lessening demand growth for all fossil fuels, including gas. As demand growth for coal and oil also weakens, the share of gas in the energy mix is still expected to increase – albeit modestly – by 2021.

Australia and US largest exporters
By 2021, Australia will rival Qatar as the world’s largest LNG exporter and the US will not be far behind.

New chapter in European gas markets
Fundamental developments point to oversupply in the market over the forecast horizon of this report which should keep spot gas prices across the globe under pressure: “unwanted” LNG supplies will look for a home in Europe, due to the flexibility of its gas system and well-developed spot markets. As a result, intense competition will develop among producers to retain or gain access to European customers. “We are at the start of a new chapter in European gas markets” Dr. Birol said.

Ample LNG supplies will also affect markets outside Europe. Weaker-than-expected demand in Asia is leaving several large LNG buyers in the region over-contracted. This should help accelerate a transition towards more flexible contractual structures. Moreover, with oil markets expected to rebalance before gas markets do, renewed pressure to move towards hub pricing and reduce oil exposure in long-term contracts will likely re-emerge before the end of the decade.

Oversupply
Dr. Birol warned that today’s oversupply could foreshadow a number of supply-side challenges and security risks down the road, noting that a growing level of LNG export capacity had gone offline during the past five years due to technical and security issues and that such problems could get worse with low oil and gas prices. As producers slash investments to refocus on cost reductions and budget savings, he said that such efforts may be too late for global gas markets to rebalance during this decade, but could sow the seeds for tighter markets into the next decade. (…)’