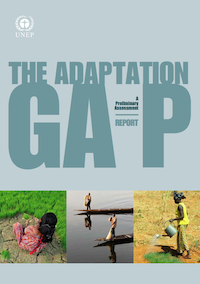 Summary
Even if emissions of greenhouse gases are stabilised at a level that is consistent with the ultimate goal of the United Nations Framework Convention on Climate Change (UNFCCC), both the risks and the impacts of climate change are expected to increase significantly in coming decades. Adopting a strategic framework for adaptation—with clearer goals and targets—would help set the direction for and track progress on adaptation universally and in relation to the ongoing negotiations under the UNFCCC. In this context, adopting an adaptation gap approach with its focus on targets—as well as on the potential for, and limits to adaptation—could be useful.

This report is being published in response to requests made to the United Nations Environment Programme (UNEP) by different parties to provide a preliminary assessment of adaptation gaps to complement information presented in the emissions gap reports UNEP has been producing since 2010. The emissions gap reports analyse the estimated gap in 2020 between emission levels consistent with the goal of keeping global average temperature increase in this century below 2°C above pre-industrial levels, and projected levels if emission reduction pledges by parties are met. Parties have found the emissions gap reports useful in helping inform their discussions at the annual Conference of the Parties (COP) to the UNFCCC.

The report focuses on developing countries, where adaptation needs are anticipated to be the highest and adaptive capacity is often the lowest. The main emphasis is on the period from 2010 to 2050, as the short- to medium- term is considered the most relevant period of time for framing adaptation decisions and actions.