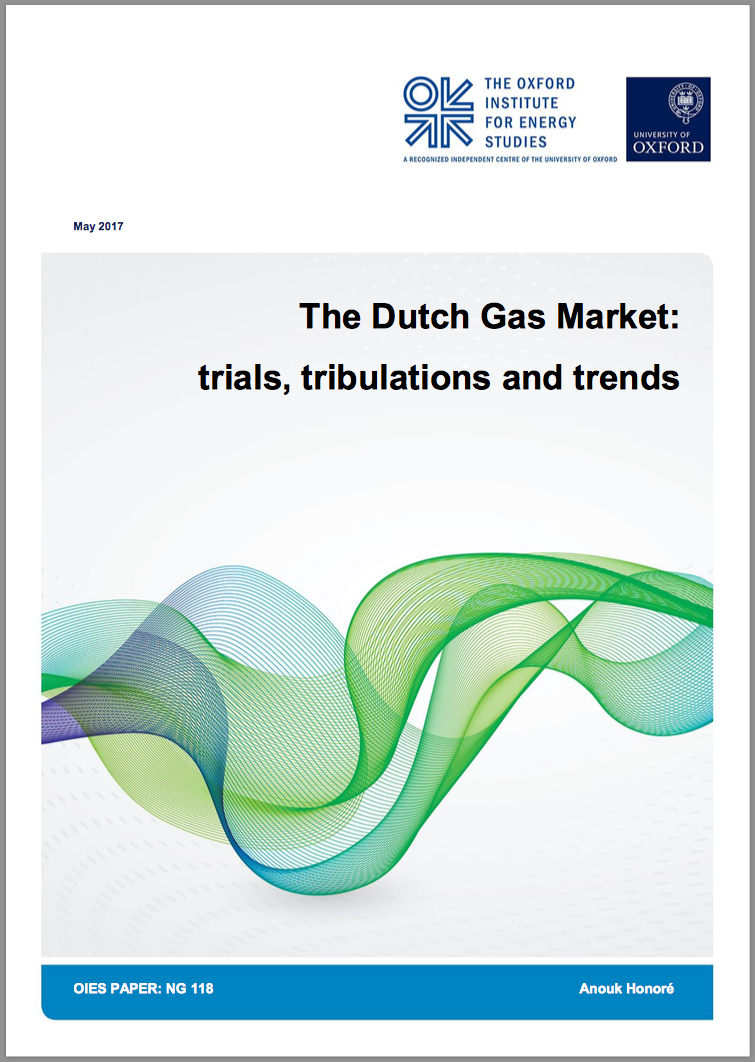 The Oxford Institute of Energy Studies volgt de Europese gasmarkten en heeft deze week een studie uitgebracht over de Nederlandse gasmarkt. (‘This paper offers some food for thought on the challenges but also the prospects and expectations for the Dutch gas industry looking ahead to a 2030 horizon.’) Het OIES concludeert dat de veranderingen in Nederland dieper ingrijpen dan menigeen veronderstelt, ook in de Europese gasmarkt: ‘These are important trends not just for the Netherlands but for the whole European gas market. This is a dramatic evolution for the European supply as a whole that is probably well under-appreciated.’
We geven de executive summary volledig weer:
‘(…) The Netherlands is the fifth largest market in Europe (behind Germany, the United Kingdom (UK), Italy and Turkey). It is also the second largest regional producer and exporter of gas after Norway. Natural gas has been at the centre of the Dutch economy, energy supply and power generation for about half a century, but its prominent role has been put into question by climate change policies and the need to decarbonize the economy.

A dramatic evolution
A very significant transition is taking place across the entire energy economy and Dutch gas consumers, once the most gas-friendly in Europe, increasingly seek alternative energy sources such as renewables and energy efficiency, which have taken central stage in energy policies while gas is at best the fuel of default. In a country where 98 per cent of households are connected to the gas network, the progressive disconnection of residential customers from the gas grid by 2050 is a dramatic evolution, which casts an important doubt over the future of gas in the country.

Anti-gas sentiment
The transition towards a sustainable economy is also overwhelmed by an anti-gas sentiment. After a much stronger than usual earth tremor in 2012 caused by the extraction of gas from the Groningen field, the public opinion about gas changed dramatically while consideration on the safety and health of the people of Groningen took centre stage. This event prompted the government to take action and restrain production from the field to help minimize the seismicity: annual volumes were limited to 24 billion cubic metres per annum (bcma) for the 2016-17 gas year, which was to last for five years, and were to be produced as evenly as possible throughout the year. In April 2017, the government announced a plan to lower the Groningen cap by 10 per cent to 21.6 bcma for the 2017-18 gas year following an increase in seismic activity in the Groningen area. In 2016, gas production from Groningen was less than half the volumes produced just three years previously, with almost no flexibility to cope with seasonality of demand as output has also to be produced at a consistent rate throughout the year to minimize the risk of large tremors. This is an important change as Groningen production would typically increase during the winter months and fall in summer to follow seasonal variations of gas demand in the heating sector.

Implications of the sharp decline in production
The problems at the giant Groningen field have been well documented, but the implications of the sharp decline in production that has been mandated as a result of seismic activity have perhaps been less well understood. The complete change in the Dutch gas outlook means a major fall in regional production from a European perspective, but nobody seems to be paying much attention to it despite the fact that gas extraction in the Netherlands has fallen from 81.5 bcm in 2013 to 68.6 bcm in 2014, 51.2 bcm in 2015, and 47.4 bcm in 2016. This is maybe because parties have been prepared for a natural decline of the Groningen field and security of supply has not been an issue as measures and regulations regarding volumes and flexibility were based on the minimum volume required by GTS. Contractual obligations have been respected and gas volumes committed on the domestic market and abroad have been delivered without any shortfall. A combination of carefully managed Groningen gas supply (including volumes in storage), production from smaller fields, higher imports, conversion to low-calorific gas and lower exports whenever possible have cushioned the effects on gas markets, and smoothed out gas price fluctuations.

Consequences for the whole of Europe
In the longer term, however, changes will need to happen and the reduction in Dutch gas availability will be the key catalyst to action. The national market will need to change, but these evolutions will also have consequences for the whole of Europe, especially for those countries in the North-West whose imports of Dutch L-gas and H-gas have historically been crucial elements of their supply. H-gas is available from other sources, essentially from Norway, Russia, North Africa in southern European markets, LNG imports from an even larger range of suppliers, and finally from the spot markets. Whether these countries/markets have enough reserves, production capacity and/or can be commercially attractive to replace 40 bcm of Dutch gas surplus is beyond the scope of this paper, but the question needs to be considered as there can be implications for increasing reliance on fewer suppliers of pipeline gas and rising import dependency.

Germany, Belgium, France
Regarding L-gas markets, large investments to convert L-gas networks, equipment and appliances to be able to use H-gas are needed and anticipated. The Netherlands is taking steps to transition to an H- gas system while importing countries have already started the process, earlier than anticipated: it is well under way in Germany and is gaining momentum in Belgium and France as all three countries will cease to import Dutch L-gas by 2030. It will then be replaced by imported H-gas, although the exact quantity of additional imports required is uncertain as the energy transition to a low carbon economy will drive the decarbonization of the heating sector (the major consumer of L-gas) in most countries in Europe post-2030.

No signs of threat to security of gas supply
As of early 2017, there were no signs that there would be any major threat to security of gas supply in North West Europe as a consequence of the restrictions taken on Groningen gas production, but the rapid change means a big increase in imports from elsewhere with potential security of supply implications (volumes, capacity, prices, and/or dependence). Dutch production surplus (production minus demand) fell from about 40 bcm in 2013 to only about 10 bcm three years later, and by 2030, it will likely have disappeared altogether. In other words, within a five year period, Dutch H-gas exports fall and disappear (by early 2020s) and L-gas exports will be halved by 2025 and will disappear by 2030.

Dramatic evolution for Europe
These are important trends not just for the Netherlands but for the whole European gas market. This is a dramatic evolution for the European supply as a whole that is probably well under-appreciated. Regional production peaked in 2004 at 341 bcm and was down to 257 bcm in 2016 (-84 bcm). This author expects regional production to decline further rapidly: to 212 bcm in 2020 and to 146 bcm in 2030. This scenario accounts for 111 bcm decline between 2016 and 2030, of which 30 bcm come from the Netherlands alone. This scenario was calculated in May 2017, but there is a risk that Groningen production could be reduced even further before 2021. Court actions to completely shut the field’s production down have so far been unsuccessful, but this may not be the case in the future. Additional revisions from the Government are also to be expected, probably on an annual basis, especially if there is further serious seismic activity in the Groningen area.

It is his paper offers some food for thought on the challenges but also the prospects and expectations the Dutch gas industry looking ahead to a 2030 horizon. (…)’