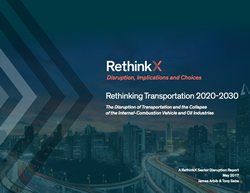 ‘(….) A historic revolution in transportation will end over 100 years of individual vehicle ownership and reshape the world’s energy economy in the process. That’s according to a groundbreaking new research report, Rethinking Transportation 2020-2030: The Disruption of Transportation and the Collapse of the ICE Vehicle and Oil Industries.

Assuming existing technologies and using well-established cost curves, the report, produced by RethinkX, an independent research group, provides a detailed analysis of data, market, consumer and regulatory dynamics. It finds that within 10 years of the regulatory approval of driverless vehicles:

“We are on the cusp of one of the fastest, deepest, most consequential disruptions of transportation in history,” said co-author Tony Seba, RethinkX co-founder, author of “Clean Disruption of Energy and Transportation,” and instructor at Stanford Continuing Studies. “But there is nothing magical about it. This is driven by the economics.”

Rethinking Transportation details how the approval of autonomous vehicles will unleash a market grab by existing and new ride-share companies, who will abandon internal combustion engines (ICE) for A-EVs for purely cost reasons. As a result:

“While these projections may seem radical because they differ from mainstream and incumbent industry projections, they are really quite conservative because they are based on assumptions that in some cases have already been bested by new technologies and plummeting prices,” said Bryan Hansel, CEO of Chanje Energy (formerly Nohm Technologies).

Uit een bericht van IEEE.org
‘(…) And the U.S.-centered view — if it doesn’t happen here, it doesn’t happen anywhere — is a little misguided. A lot of these technologies are global. The Chinese are working on self-driving, and Europe is working on self-driving. (…) auto dealers, car repair shops, taxicabs, buses, car insurance, filling stations, not to mention oil companies and car makers, will all be hit by a shockwave as the rapid adoption of self-driving electric vehicles drains these present-day industries of income. (…)’

Uit een bericht van Energy Post
‘(…) Lead consultant and co-author is Tony Seba, who specialises in disruptive technologies. His early forecasts for the enormous uptake of solar where considered crazy, but were proved right, and he has since said that new technologies will make coal, oil and gas all but redundant by 2030).  (…) Like his predictions on the rise of solar, and the sudden decline of fossil fuels, Seba’s calculations are driven by simple economics. Within few years, the upfront costs of AEVs will match those of petrol cars. But the depreciation costs will be minimal, because the cars, owned by fleets, will “last a lifetime”. Maintenance costs will be significantly lower – thanks to 20 moving parts in the powertrain compared to 2,000 for petrol cars – and the miles travelled significantly higher; they will be doing 1.6 million km by 2030, more than five times more than petrol cars. (…)’

Bronnen
RethinkX, 4 mei 2017: New report: Due to major transportation disruption, 95% of U.S. car miles will be traveled in self-driving, electric, shared vehicles by 2030
RethinkX, rapport: Rethinking Transportation 2020-2030 – The Disruption of Transportation and the Collapse of the Internal-Combustion Vehicle and Oil Industries (pdf, 77 pag. -registratie vereist)
IEEE Spectrum, 4 mei 2017: RethinkX: Self-Driving Electric Cars Will Dominate Roads by 2030
Energy Post, 12 mei 2017: Death spiral for cars. By 2030, you probably won’t own one