Uit het persbericht van de IEA
‘(…) Kamel Ben Naceur, a former Schlumberger executive with extensive experience in technology and clean energy, joined the International Energy Agency (IEA) this month as Director for Sustainable Energy Policy and Technology. In his new role, Mr. Ben Naceur will lead efforts to modernise the IEA’s approach to energy technology and guide IEA outlooks while strengthening the role of the Agency as the leading organisation for advanced energy technologies. (…) 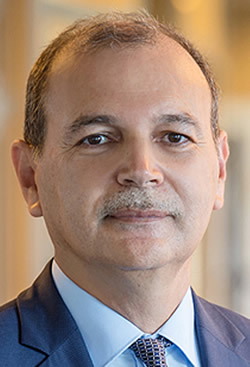 “Mr. Ben Naceur is eminently qualified to modernise the IEA’s approach to energy technology, and I am delighted he has joined us,” said IEA Executive Director Fatih Birol. “His considerable experience in clean energy, accumulated during a long and distinguished career in the energy industry and in government, will be invaluable as we work to further promote the critical importance of innovation and technology in solving the world’s current and future energy challenges.” (…)
In 2009, he became the Chief Economist at Schlumberger in Paris, responsible for the strategic outlook of the world’s largest oil and gas services company. (…)
Mr. Ben Naceur is a national of both France and Tunisia. In 2014, he became Tunisia’s Minister for Industry, Energy and Mines. (…)’